Really though, you don’t have to.  Unless you’re into that sort of thing.  In which case, please keep it to yourself.  Hah.  Now that I have your attention, I’ll share our drawer situation.  Please note, no drawers, whether pants or the real deal, were dropped in the making of this post.  Last weekend, Ben  built seven drawers!  Four are for my office, three for the laundry room.  Though, we still need two for the bathroom…  Hmmm.  For nearly a year, (351 days, but who’s counting) my office has been in need of a drawer stack. 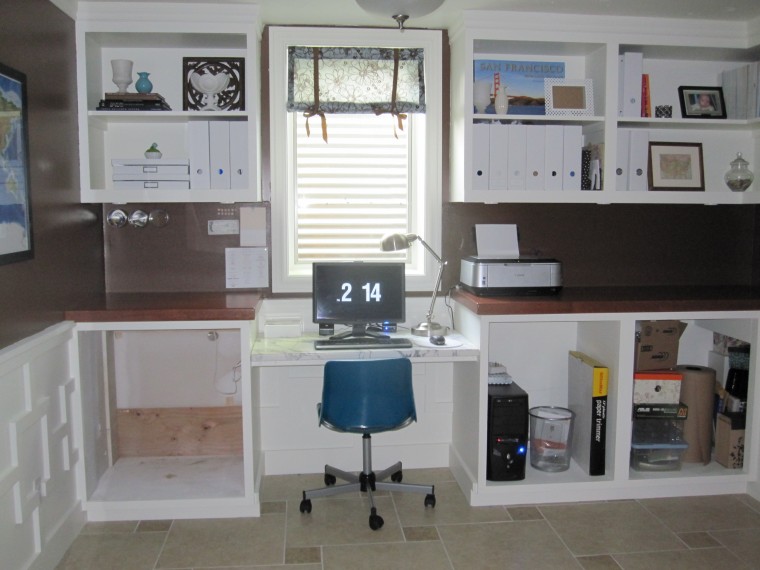 The laundry room has been in need for a few weeks now.  Of course, because Ben’s office is the laundry room, drawers were necessary, stat!  So, last weekend, Ben built a drawer city.  Seriously, it looked like Ben was starting a doll house hobby.

We considered painting the drawers (inside and out) Vermont Cream, the same white used throughout our house.  But, we decided against it, for a few reasons.  Number one, the drawers are built of cabinet grade plywood, so they’re not totally ugly.  Number two, heavy things will most likely do in the drawers, which would probably scuff the paint.  Number three, I’m lazy and in a hurry to get things done.  (You know the song, sing it!  P.S.  Can you tell I’m a country music lovin’ gal?  Well, country and old rock.)  Though, if number one didn’t exist, we would have painted the drawers, scuffing concerns and all.  To give the drawers a nice, cleanable finish, we used Varathane polyurethane in a satin finish, which we had left over from refinishing our bookshelf. 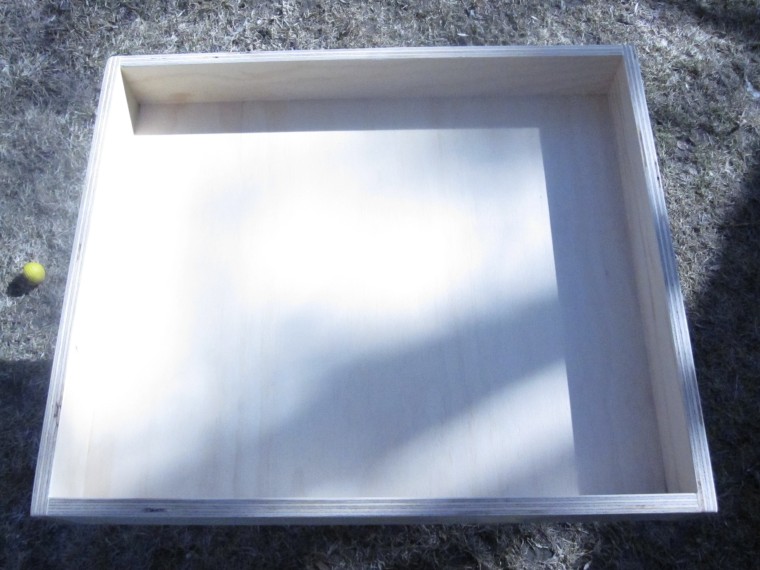 Two coats of polyurethane later, we hauled the drawers inside to install.

After the brief intermission, Ben got back to work and installed the remaining three drawers. 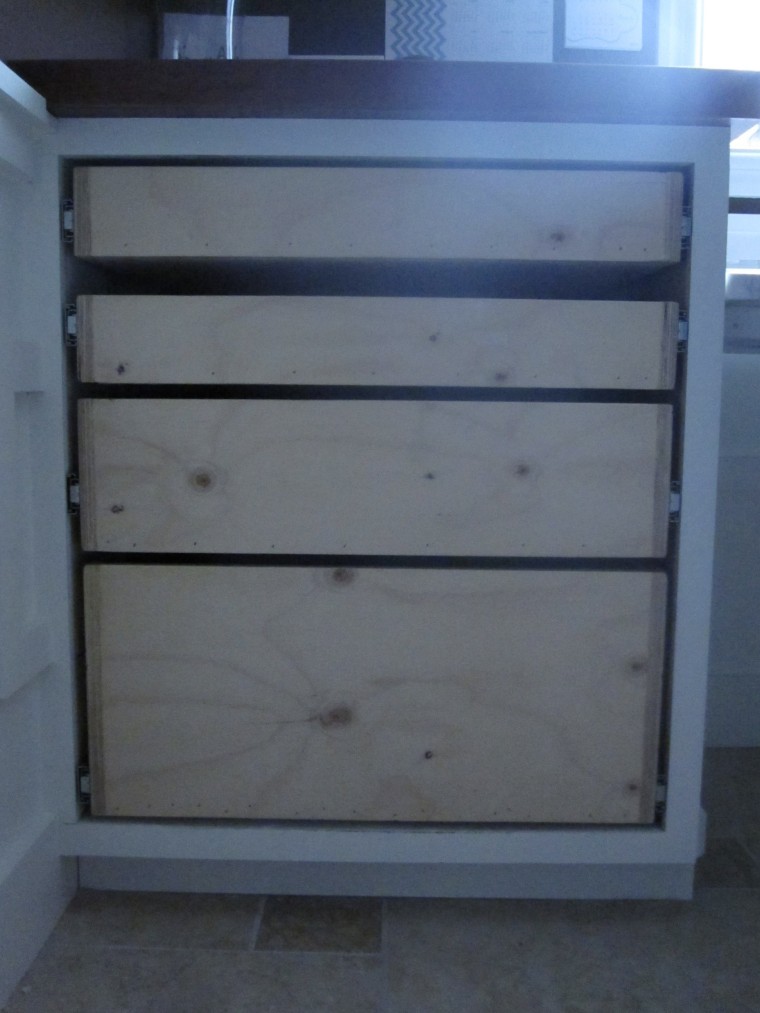 You’ll notice the spacing of the second drawer isn’t even.  I’m not going to lie, it wasn’t completely intentional, at first.  When building, we always leave wiggle room.  Turns out, we left wiggle room for our wiggle room.  I decided the second drawer should get that extra space.  Right now, it’s obvious because the top two drawers are the same size.  But when we add drawer fronts, the second will be slightly larger, covering the gap. 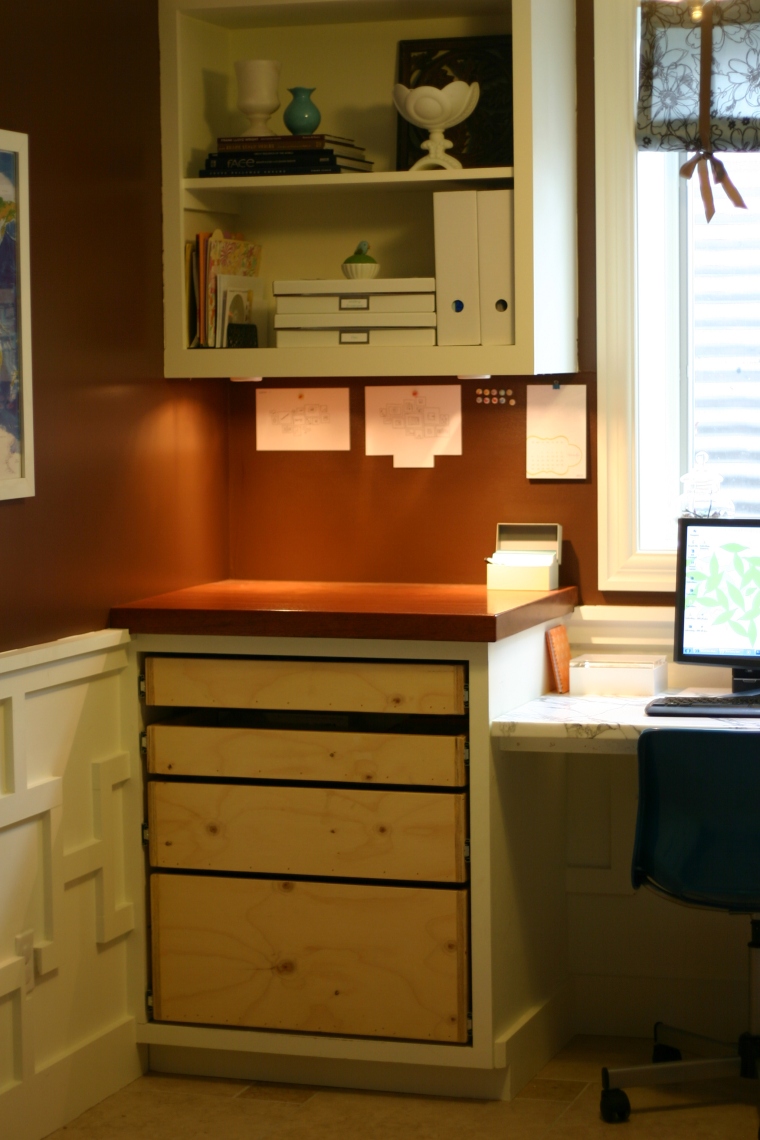 But, I’m totally psyched to start filling those drawers to make my space even more functional and organized. 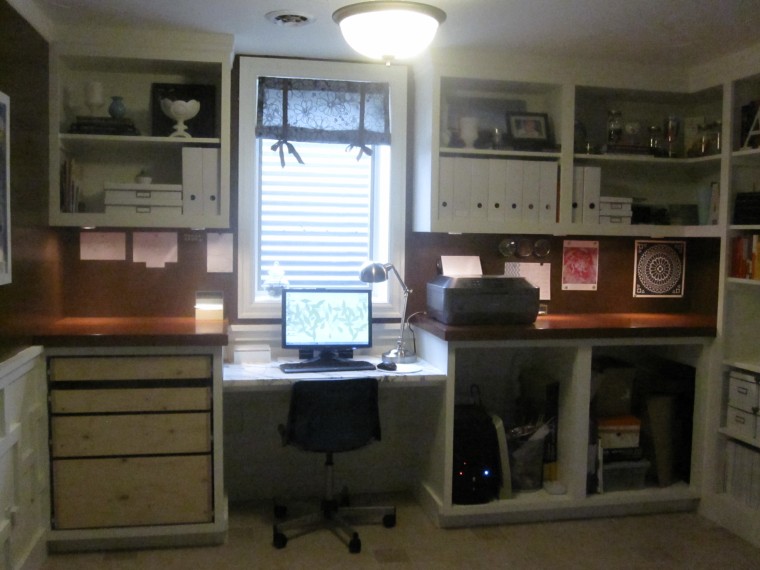 Oddly enough, we still haven’t installed the laundry room drawers.  With good reason, not sheer laziness.  It’s a long story, so if you don’t care, we’ll see you back here tomorrow.  If you do care, I’m sorry, but you must continue reading for the pot of gold at the end of the rainbow. 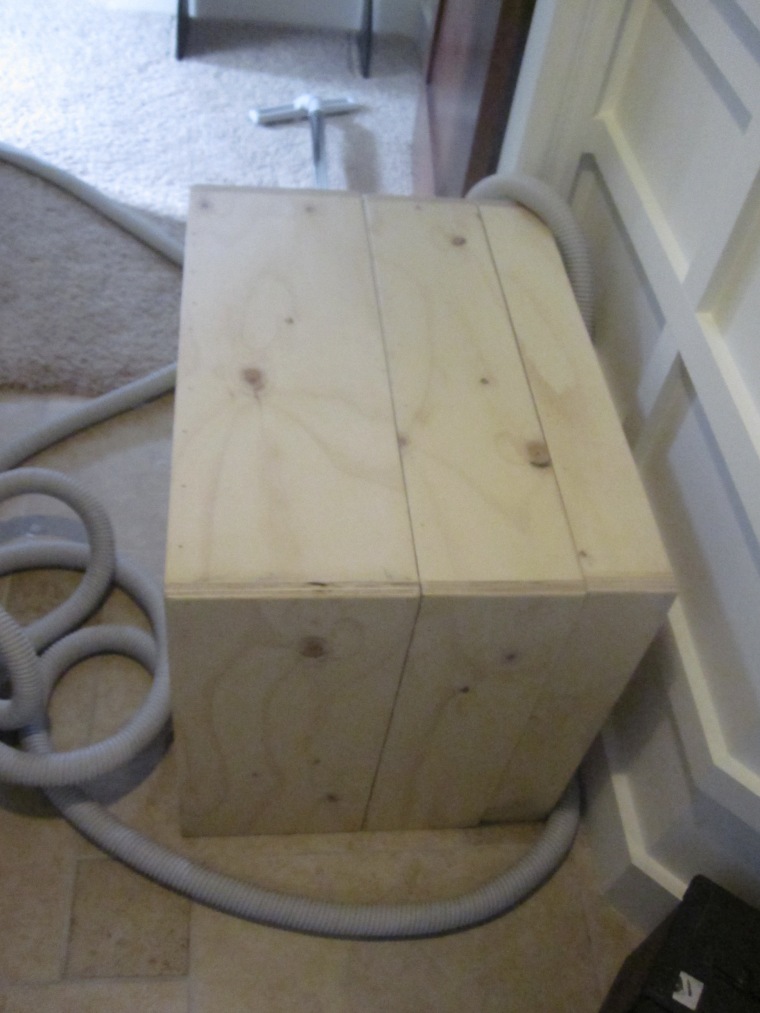 You see, we will eventually remodel our kitchen.  Ben wants to build the cabinets.  So, he bought three sets of drawer glides he thought he liked enough to use in the kitchen.  You know, try it before you buy it, so to speak.  Then, I saw the glides and how much space they would steal from our drawers and put the kibosh on their use.  Blum drawer glides (the tester brand we bought) mount to the bottom of the drawer and are 1 1/4 inches tall.  Add our 3/4 inch of material for the drawer base and we’re losing 2 inches of usable space.  Per drawer.  Ouch.

When we design drawers, first we subtract our material dimensions.  Then, I design drawers based on the tallest thing to go in each drawer, or the usable space I’d like per drawer.  I wanted three drawers in the laundry room.  Four, eight and ten inches of usable space inside.  Had we used the original drawer glides, we wouldn’t have the top drawer.  Long story short, we built the drawers based on the old style glides, (also used in my office) but we have yet to return the Blum ones and buy three more sets.  So there you have it.  Pot of gold for you.

As we work toward a kitchen remodel, we’re deciding on what stays and goes.  Anything you have in your kitchen and love?  Or hate but thought would be great?  Where do you store your tools?

16 thoughts on “Drop Your Drawers”