Usually, I don’t get very into Halloween, but this year, Vincent really did.  You’ve seen the decorating we’ve done, including a feather wreath, spooky tree, a stump side table, and carved pumpkins.  Although this isn’t home related, I just had to share our boys’ costumes.  Vincent requested to be a credit card.  Seriously, I did not suggest it.  What three-year-old wants to be a credit card?  Mine, I guess, so I went with it. 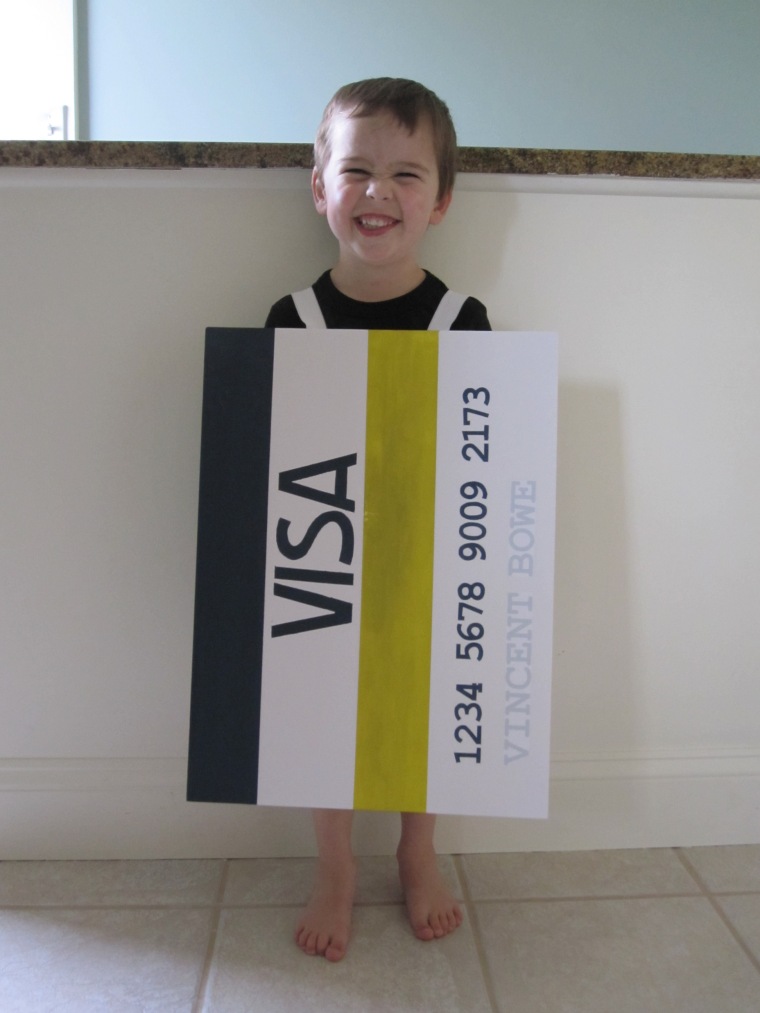 I bought one piece of foam core from Hobby Lobby for $1.99 and cut it in half.  Then I measured and taped off lines to mimic a VISA card logo.  I mixed up my paint and filled in the areas and letters.  To create the letters, I printed off a set of 16 numbers, cut them out, painted and glued each number on the card.  To create the back, I simply measured and taped off a magnetic strip area on the back, painted it black, made a border for the signature and filled it in with a Sharpie.  To make this wearable, I hot glued two strips of ribbon over the shoulders. 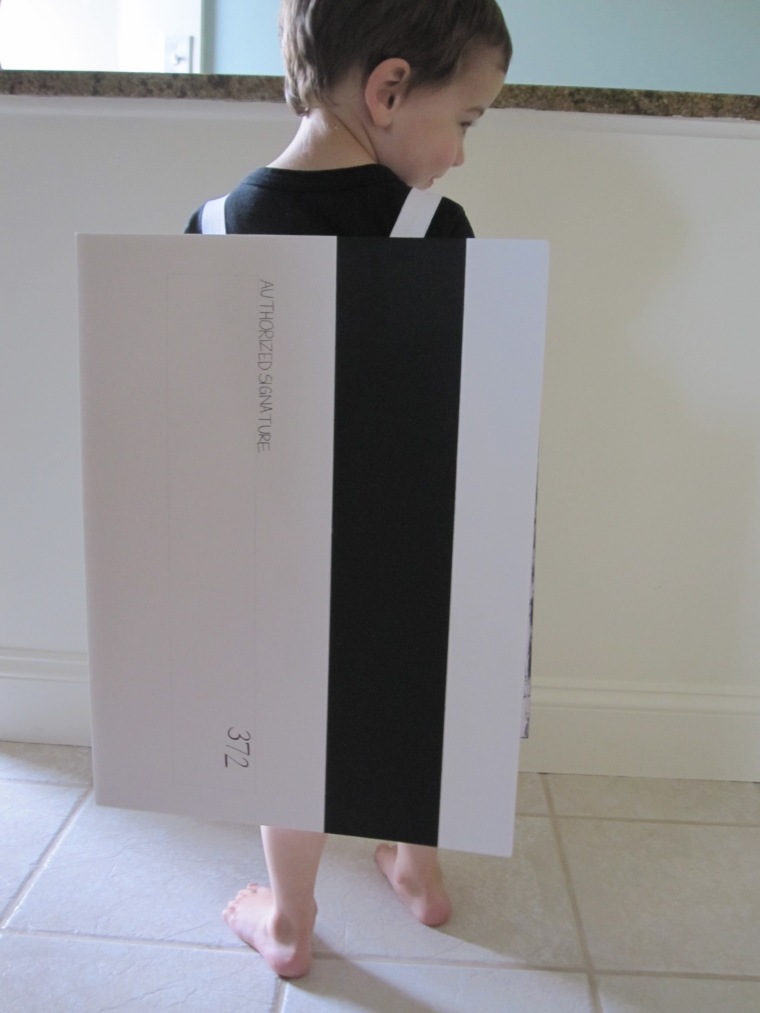 Total cost for a credit card costume: $1.99.  The look on Vincent’s face: Priceless.

I decided that Everett would make the perfect baby Hulk Hogan, so we used a pair of red sweatpants, red socks, and a plain white, long sleeve shirt from his wardrobe. 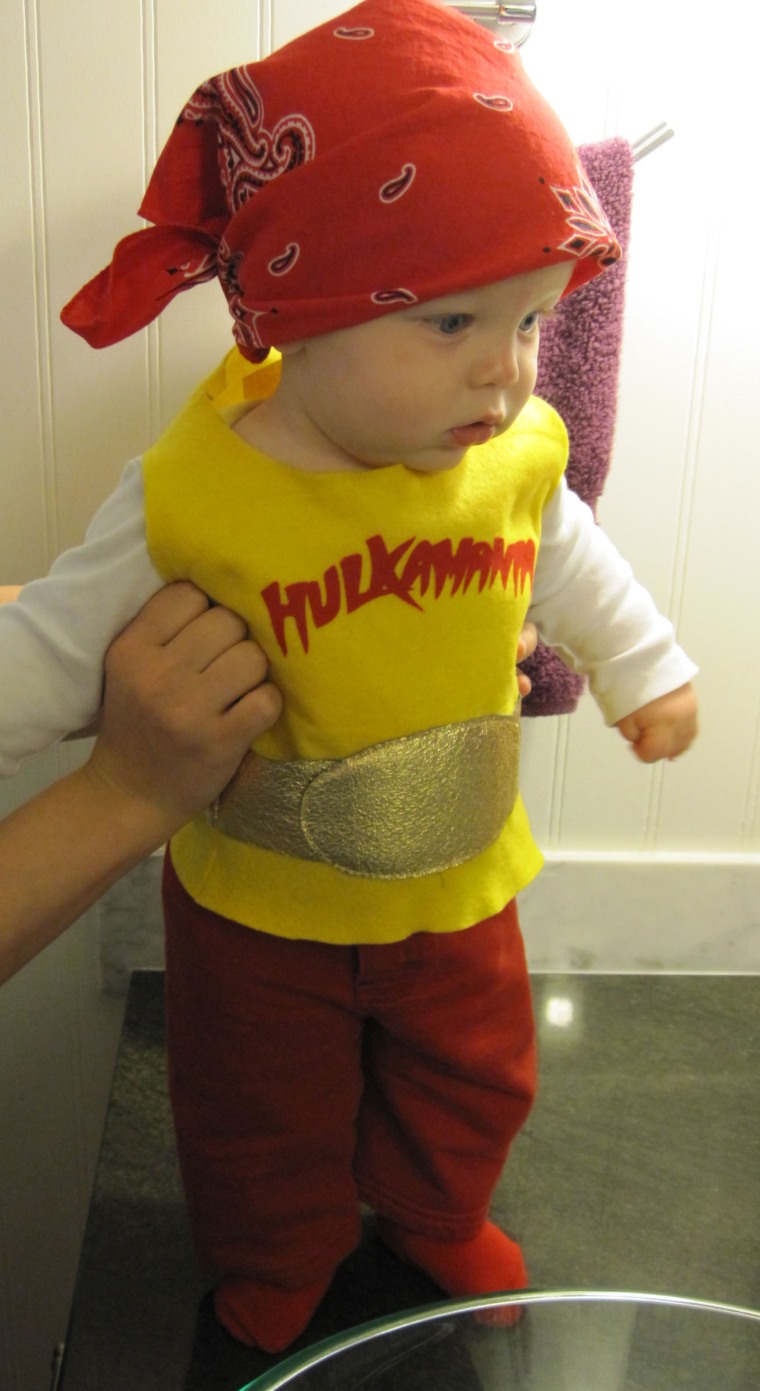 I sewed a ‘tank top’ out of yellow felt, left over from this pillow, using a shirt of his as my size guide.  Gaudy gold fabric for $2.00 made the perfect wrestling belt, which I sewed to the yellow felt.  I bought a small piece of red cotton for $1.99 to make the ‘Hulkamamia’ logo.  To create the logo, I used left over fusible webbing from my tweed leaf bowl project and followed the same directions, only drawing the logo backward on the paper.  I ironed the logo to the front of the shirt, added three buttons to the back and we had a Hulk shirt.  A $.99 red bandana completed the look.

Vincent’s costume was a big hit.  Everett’s didn’t get as much attention, but he wasn’t standing at the door asking for candy, either.  What are your favorite costumes?