I’ve had a major crush on this pendant, dreaming of having it, or something similar in our entry since we bought this house. 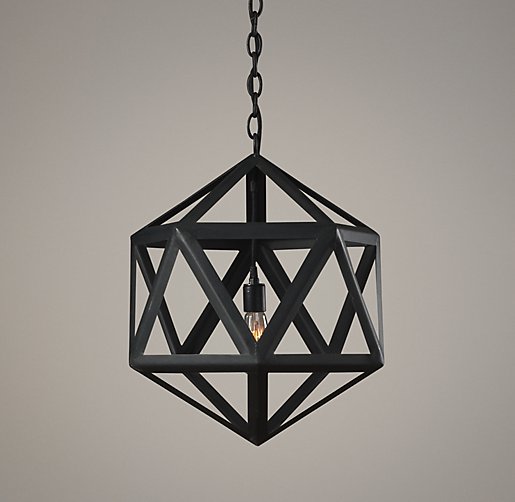 Eureka!  Couldn’t I merge these two together?  I ran my idea past Ben, but he worried a single bulb wouldn’t light the entry adequately.  Determined to give this a try, I decided to scale down the size to make a pendant for our bedroom.  Goodbye old fan.

I started with my supplies, 36 one foot pieces of 1/2 inch PVC pipe (under two bucks for 10 feet!), wire, and black spray paint.

Using the wire, I threaded three pieces on and twisted the wire ends together.

Then strung through one of those pieces, adding two more on, securing the ends with a few twists.

I made a group of four, brought it in the house and realized it would hang down too far.  So, I took it apart and cut the pieces down to 8 inches.

Treating each triangle individually made easier and tighter connections.

After twisting the ends several times, I cut the wire and pushed it inside the pipe.

The easiest way to think about this design is a hexagon turned to a six-sided star, like this:

To make the three-dimensional shape, connect the outer points with another piece.  I’d suggest hanging it to make work easier.

String on the last six pieces, connecting all to the center point.  And time for spray paint.  We had beautiful weather, so I strung it up between two trees and got my spray on.

I thought I had a pendant kit, but used it in the guest bedroom.  So this guy hasn’t been installed, but is finished.  Off to ReStore to snag a cheapie pendant to hang this dude.

Now that it’s assembled, I wish I had made the top and bottom six pieces a little longer than the rest.  The points aren’t nearly as noticeable as the Restoration Hardware version.

Not perfect, but for $16 in materials I can’t really complain.

What do you think?  Are you crushing on an expensive light?

16 thoughts on “When Pins Collide”