Skip to content
Heads up, this is a sponsored post, thanks to RugPadUSA for sending us a free rug pad.  As always, all content and opinions expressed are my own.  If you’re in need of a quality rug pad, keep reading.  If not, feel free to skip this and carry on with your day.  🙂

Just a few months ago, I ordered an 8 by 10 foot Jute Herringbone rug from West Elm to soften our family room.  I absolutely adore the neutral tones, subtle pattern, and how soft it is underfoot.  No scratchy material or nubby texture that hurts to walk on here, just a pretty rug to round out the seating area.

What I don’t love is that it lacks a backing, allowing it to stretch and bunch easily, especially around the coffee table and the sofa.  With such a heavy table on casters, it’s still easy to move, but the rug usually moves with it.  And the couch gets jumped on and pushed around by two little boys I know, which stretched one of the corners.  Ben wanted it to go, but I wasn’t about to let that happen. 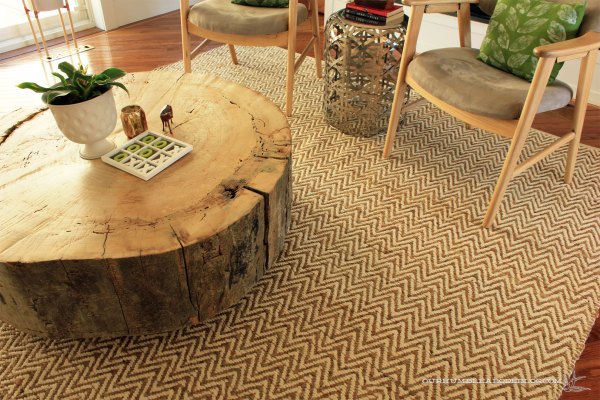 I’ve seen plenty of cheap rug pads at box stores, but they’re thin and always smell awful, so I didn’t want to waste money on those.  Knowing rug pads aren’t the most glamorous or exciting detail, I put off my search.  Ironically, just after straightening out the rug, again, I received the perfect offer from RugPadUSA.

I could pick which of their rug pads suited my floors, rug, slip factor, cush level, and size to use in our home.  After looking at the many options, I landed on the 3/8 inch thick Premium-Lock Felt + Rubber rug pad, cut just a few inches smaller than my rug dimensions.  It arrived within a week and I wasted no time clearing the room, thoroughly vacuuming the floors, and unrolling it.  The pad had just the slightest odor, presumably from the rubber backing, but it quickly dissipated. 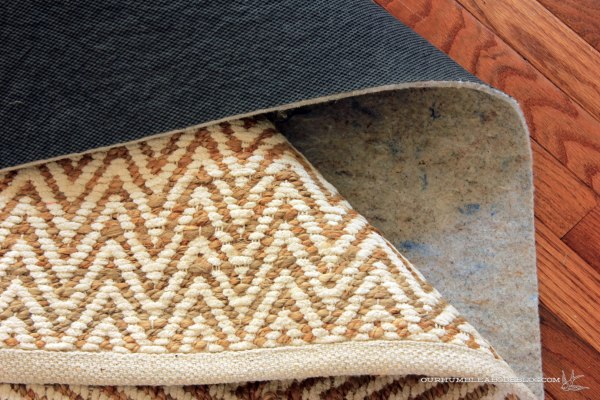 The under side is covered in a natural rubber backing, preventing slipping and sliding against smooth surfaces, while the top is cushy felt with a slightly sticky texture.  That sticky texture keeps the rug securely in place, but offers a nice cush underfoot. 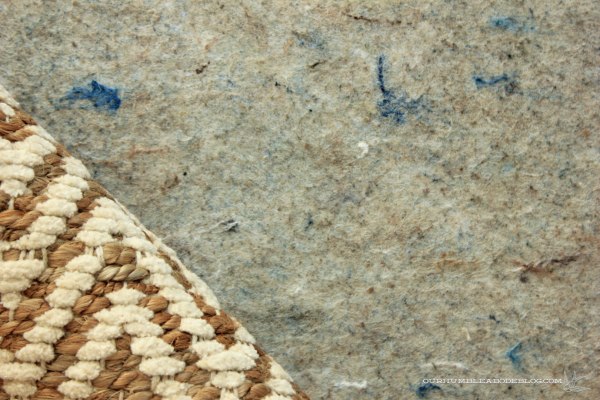 After getting the rug pad and rug back in place, I called Ben over to give it a test walk.  I joke that he’s a rug snob because he loves thick, dense, wool rugs.  He thinks the boys’ rug is so comfy that I should get another one for the living room, despite it being too small and well, too blue for any other rooms in our house.  For the first time since ordering the rug, he approved of the pad + rug combo.  With the official seal of approval, we brought the table, sofa, and chairs back in place. 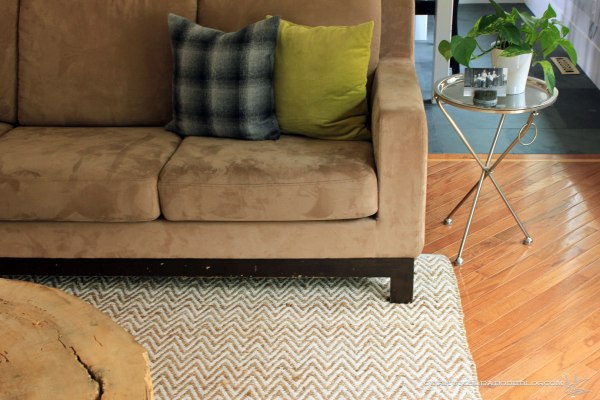 Over the last few weeks, I haven’t had to adjust the rug at all, nor have I noticed any stretching.  Count that a serious win in my book, but even better, the nearly 1/2 inch thick pad makes it plush, keeping Ben happy.  Who knew rug pads could save rugs, but also marriages?!  Ha, that’s incredibly dramatic, but, it did keep me from having to find and buy yet another rug for this space.  In summary, if you’re considering the West Elm jute rug, I’d highly recommend getting even a thin rug pad, just to keep it from bunching and stretching.