With the five-year mark just passing, taking a look back was satisfying.

But, seeing progress in the warehouse, I mean pool house, is equally fulfilling.  Unlike the rest of the house, this room has, without a doubt, only gotten worse as we’ve lived here.  After closing, the pool house looked like this:

Certainly not the worst starting point, but still far from our ideal.  Indoor carpet, stained lap siding on the walls, water stained beams, and a fiberglass ceiling had all seen better days. 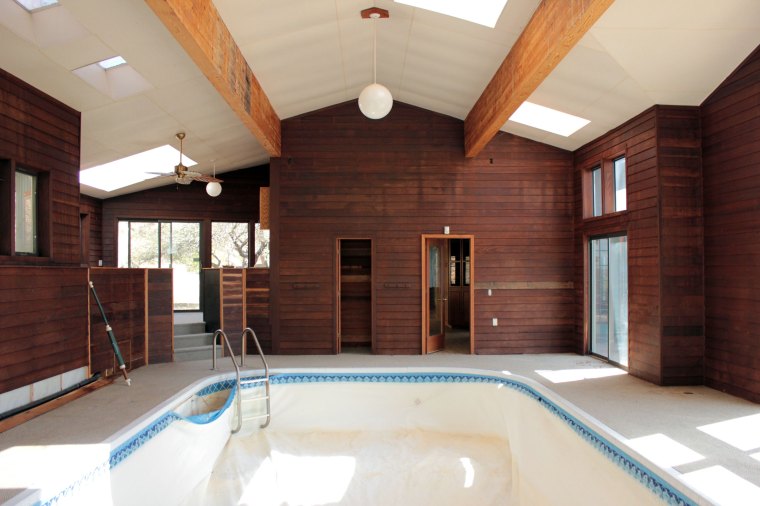 To revamp the space, the first order of business is always demolition.  First the ceiling, followed up with the floors.  Oh boy, this was a treat.  And by treat I mean hours of Ben chiseling and chipping and me with heavy buckets to haul and oodles of vacuuming.  Let the good times roll.

About halfway through the tile removal, we took a break and knocked out the half bath for fun.

The in swinging door at the center of the room made it awkward to actually get in the room and close the door.  Instead, we want to add a pocket door, keeping the room open and accessible.

To start, we tore down the previous wall and planned out the new door placement.  Then we built a new header, as well as a full new wall.  Just to the right, we built up the wall to accommodate a wider door leading into the kitchen.  To do so, we had to transfer the load of the overhead beam by adding a massive header.  Finally the fun part, opening up the wall for the new door.

Install went smoothly and we’re loving the flood of light coming in the office.  The wider door also makes the pool house feel more intentional, like a part of the house and less like the addition it is.

Framing the larger door adds balance to the large wall, unlike the second photo above. 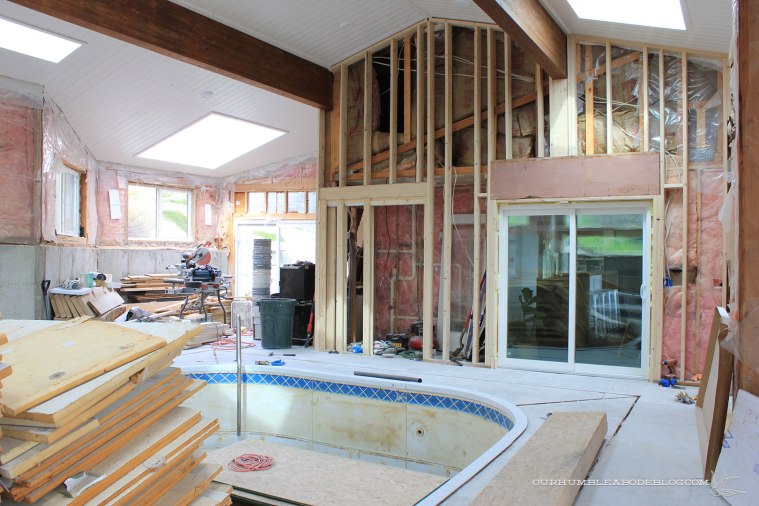 With that wall built, we got back to chipping up tile and mastic.  Fingers tightly crossed, we’re past the worst part of the demo work.  Three more walls to build, electrical to run, and we’ll be able to start laying tile and getting to the pretty parts.

Soon all of the plans swirling around in my head will start to take shape, which is a thrilling concept.