I don’t know why, but I’m not a fan of sewing curtains.  No wait, I do.  Large pieces of fabric, lots of measuring, even more pinning, and ironing are all involved.  That’s not to say I don’t like the result, it’s just getting there that I don’t love.  We decided to leave the curtains with our first house, which means I’ve sewed curtains recently.  Until this weekend, we have been curtainless in the living and dining rooms, moving our heads to escape the glare of on the tv.  Nothing like a Lost marathon to light the fire to get these done.  Oh, and I finally formulated a plan to cover our ten and eight foot wide windows.

It all started with a trip to Home Depot, where I bought all the curtain supplies.  Ben and I decided on a less conventional rod system, which meant I had to figure out a way to hang the curtains without removing the rod.  More on that later.

Anyway, this started out with two 9 foot by 12 foot canvas drop cloths, washed with vinegar added to soften the fabric, and cut in half to make four 6 foot by 9 foot panels.  I always start by sewing the sides of curtains.  After doing that to all four panels, I got started on the tops.  Here’s a little trick I like to use to make sure things are as square as possible.  First, I line my hemmed edge along a rug.  Then, I pull the top over enough to fold it over. Starting at the center, I carefully fold the fabric over, keeping the edges of the fabric flush with the edge of the rug.

Then I cut off the excess fabric, including angling the corners to cut the bulky seams.

For a clean, finished edge, I fold the fabric over again, using a line in the rug to keep this even, too.  Of course a measuring tape would also work.  Haha.

Here’s where the easy removal without taking the rod off comes in.  I considered buying curtain clips, but decided not to because I didn’t want to buy five or more packages to work with the extra wide panels.  Instead, I started by sewing ribbon tabs, just like I did for the boys’ curtains.  Of course the tabs aren’t removable, so I sewed only the top of each.

Ben has heavy-duty snaps left over from his leather working days, so I used those on the bottom of each tab.  Each snap consists of four pieces;  two posts (on the left and right), a male, and a female piece (real names, by the way). 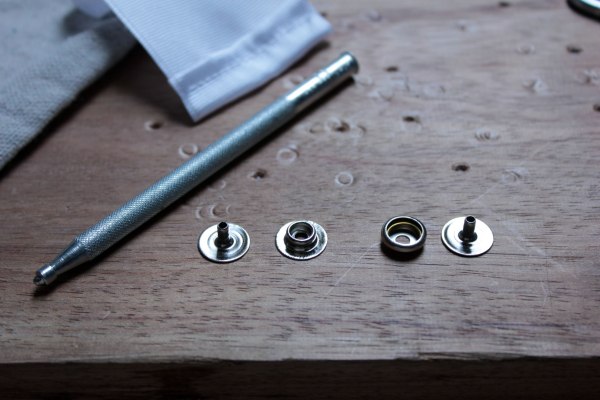 After punching a hole in the ribbon tab, I poked the post through, then set the female end on top.  Several taps with the setter and a hammer pushes the post down, clamping the female piece in place. 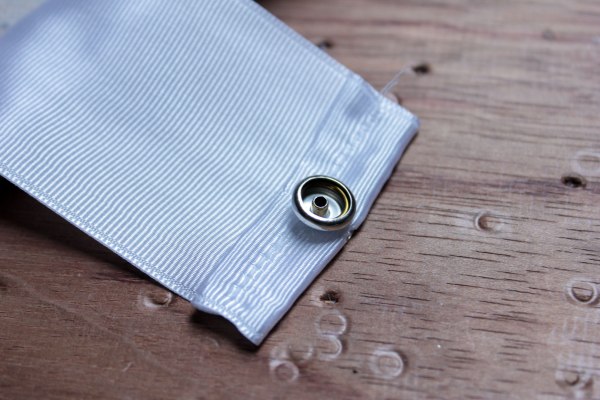 To mark the other piece, I folded the ribbon back and made a dot where the snap sat.

I found the easiest way to make the holes in the fabric was with an eye hook, screwing it through.

The post goes on the outside of the curtain, with the male piece on top.  Tap it in place and snap together.

I’m really impressed by how strong the snaps are.  Seven hold up the weight of the curtains just fine.

I actually like the ‘studded’ look the snaps have on the front of the panels, too.

Just a little dose of edge/industrial.

Now that we’ve got them hung, I need to measure and hem the bottoms.  I suppose I should iron the panels while I’m at it, then time for a full reveal.  Guess I know what I’m working on today.

7 thoughts on “Sewing Curtains is Sew Not Fun”