This little update has literally been years in the making, so I’m stupidly excited about it.  As such, many pictures are included in this post, be warned.

Now this is the story all about how our living room got flipped-turned upside down*:  this week, our house benefitted by the addition of not one, but two new rugs.  I know that seems stupid and insignificant, but rugs are something Ben and I often disagree about.  He wants sink in softness, I care more about size and design/color.

The only reason it took me so freaking long to order this was because I had pined for the Marquis rug from West Elm.  For whatever stupid reason, West Elm doesn’t have a product review feature on their site.  Ugh, when ordering site unseen, those reviews are really crucial in the decision-making process!  I tried to see it in person, strike one.  Order a sample?  Strike two.  I finally decided to ask the people who had featured the rug on Instagram for their opinion-the reviews were not great.  Strike three, the Marquis was out.

So, I went with my fall back option, a 9 by 12 Moroccan Trellis rug that I, and apparently everyone else, recently snagged for under 300 bucks.

The boys helped me place it, rolling across it to ‘steam roll’ the curved edges.  They even ‘helped’ me move the furniture back in place.

Yes, this rug is popular, but for good reason(s).  First, the neutral design.  The reason the Marquis was appealing was the neutral color scheme with subtle geometric pattern.  This rug has both features, but was less than half the price!

Secondly, that price!  Like seriously, how do you pass up a giant rug for $300, plus free shipping?! 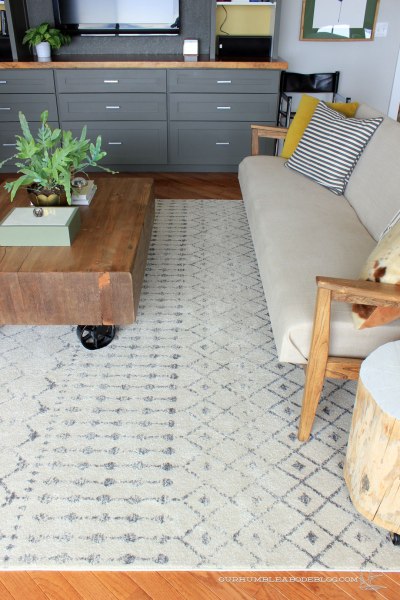 The only negatives I read were about the color, which wasn’t as white as some wanted.

A true white rug wouldn’t work in our house with our kids, but the slightly oatmeal tone pairs beautifully with our leather and linen sofas.

Do I feel the same as other reviewers?  Absolutely, so far, I have zero regrets ordering this rug.  Considering the rug was under $300, it’s far more plush/thick than I anticipated, though still not crazy thick.  I added a felt rug pad below to give that sink in cush Ben really wants.

Unlike the Marquis rug, this is polypropylene instead of wool, but it’s still incredibly soft underfoot. 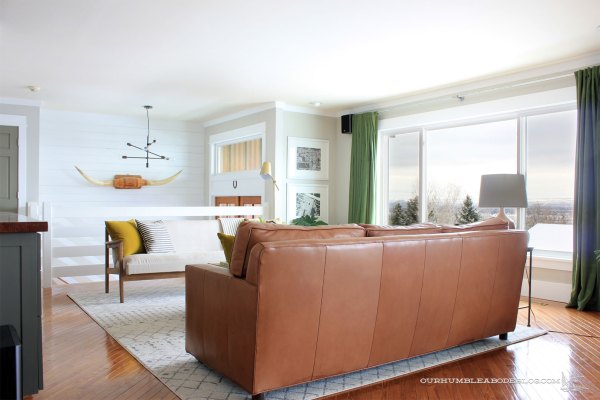 Finally, we have a rug that all legs of the furniture can rest on. 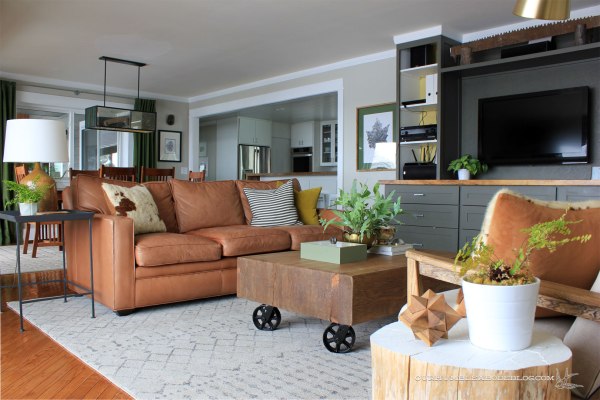 AND, it looks great.

Despite being a trendy design, I think the neutral base will work well and look great for years to come.

Go on down those stairs and you’ll see the Trellised Garden runner for our garage entrance/mud nook.

When setting out my search, I wanted an easy to vacuum/not thin, subtly patterned, dark, but still colored rug.  With all the neutrals in this area, I thought a navy or deep green rug would liven things up. 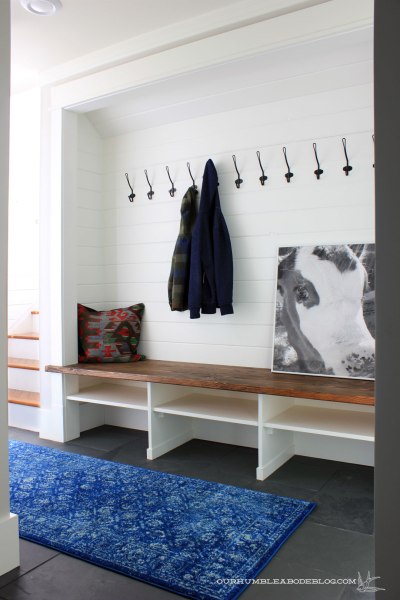 Again, this rug is polypropylene, so it can stand up to heavy traffic and isn’t too precious to use in this area.

Unlike so many new made-to-look-old/worn/faded rugs, this has a smaller ‘wear’ patterns.

Not only is this pattern forgiving, but it also looks more realistically aged than others I’ve seen.  All in all, I give these rugs two very enthusiastic thumbs up.  And I’m kicking myself for taking so dang long to make up my mind.

*One million bonus points to you if you recognized and sang the Fresh Prince of Bel-Air theme song.