As I shared, my first ever fabric dye slash ombre project didn’t go as well as I imagined it would.  (Thank you so much for your tips and tricks.)  Bummer, but I don’t give up that easily. I’m Polish after all.  Wait, maybe Polocks aren’t known for stubbornness as much as ignorance.  Either way, I was determined to try it one more time.

Having learned from my mistakes, I bought two boxes of purple dye and a full-sized flat bed sheet. 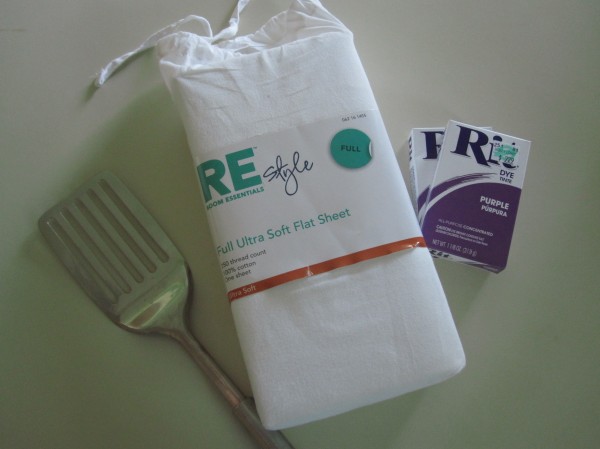 I also used the main bath tub. About half way into my process, I laid a junk towel under the bucket to protect the acrylic tub.  Pretty sure a dyed bath tub would be an epic failure, even if I successfully dyed the curtain. 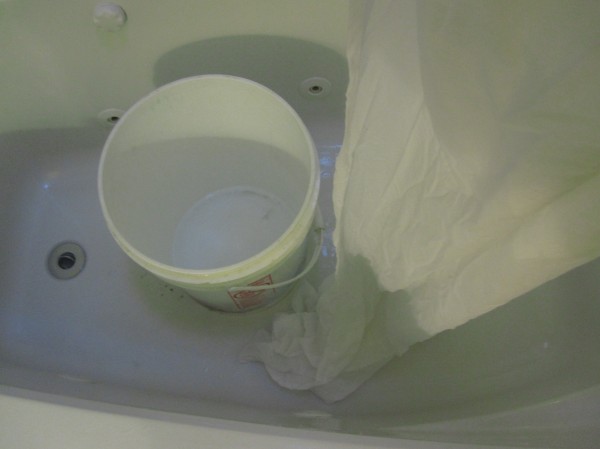 To keep the dye line as even as possible, I hung the sheet on the shower curtain using the existing shower curtain rings and a set of curtain clips I had in the basement.

I slipped the curtain clips through the curtain rings because the clips were too small to fit on the shower rod.  Then, I clipped my sheet up so I wouldn’t have to touch the curtain, just the rod and clips.  I highly suggest this method. 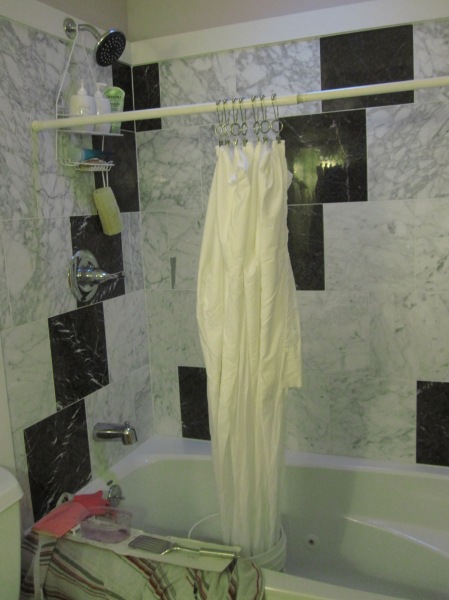 I decided to use one half of a box to dye my first ombre layer. 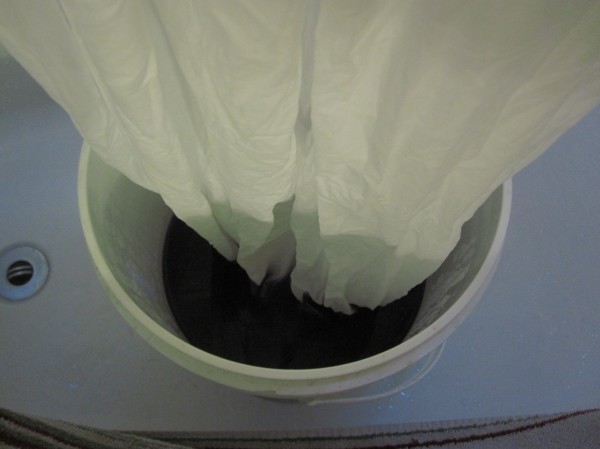 I didn’t realize it until later, but I completely forgot to add salt or liquid soap.  Oops.  I did however let the sheet soak for about 20 minutes, stirring constantly with a stainless steel spatula.  With a nice, saturated color, I moved the curtain rod up about eight inches and added the second half of the box to the bucket.

After 20 or so minutes, I moved it up another eight inches and added the entire second box to the mixture to let it soak.  Before dumping the dye solution out, I dyed the ends of two white towels, just for fun.  I rinsed out the sheet and towels, but as I neared the end, Everett woke up from his nap, so I quickly rinsed out the rest and popped it into the washer for a quick clean.

Now, I had to figure out a way to hang this thing.  I started by sewing the sides to the width of our shower curtain liner.  I ironed the edges and got freaked out because the heat of the iron turned the dye pink.  After 15 seconds or so, the color did go back to normal.  So, I continued ironing and folded the edge over twice to get a clean edge and pinned.  I planned to only sew one side and the top to get my measurements.  The white thread from the sheet didn’t absorb the dye, so I was safe using white thread to hem everything.  I sewed my side first.

I considered sewing button holes to hang from, but my button-hole function didn’t want to work for me.  Plan B.  We needed a new curtain liner for our bathroom, so I cut the grommets off the old one to sew to my sheet.  I pinned right sides together so my seam would look as seamless as possible.

Then, I stitched right along the plastic edge, but not on it. 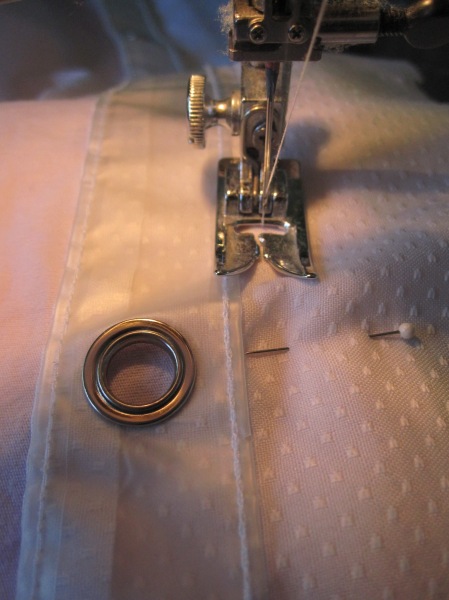 A quick pressing with the iron made a nice crisp seam.  Unfortunately, I did have dyeing issues again.  Off to rectify that situation.

How much are you willing to spend on a shower curtain?  Have you ever made one yourself?