In the master bath, the room looked cold before adding the dark walnut vanity.  After, the room came to life, and contrasted against the darker elements. 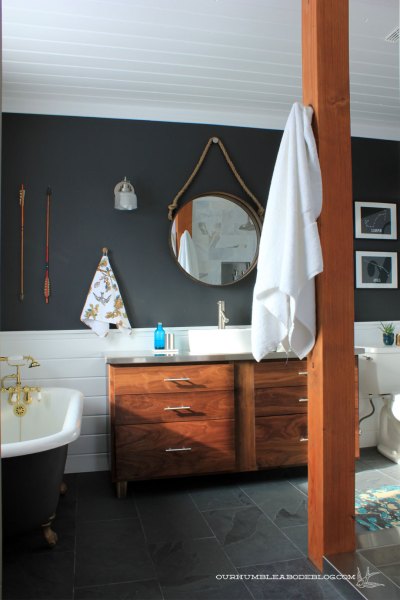 Seeing the result, and the combo with the slate tile, we knew we wanted a similar look in the kitchen.  Essentially, several elements from the bathroom were a trial run for the kitchen remodel; slate floors, tongue and groove planks, and walnut cabinetry.  The slate has held up beautifully, and we love the subtle texture the tongue and groove adds.  Just recently, we added the walnut to the kitchen scene.  It’s so amazing how different wood looks unfinished versus unfinished.

Bland, gray-ish sanded wood transforms to bold and beautiful.  Not to be confused with The Bold and the Beautiful soap opera.  The change isn’t nearly as dramatic.  Nothing dead coming back to life twenty years later.

One drawer stack oiled, the other waiting to get attention:

The left side below the cooktop is actually two fronts attached to the single trash drawer.  Super sneaky ninja move right there.

Getting all the drawer fronts attached and oiled made a world of difference, but the lack of toe kick needed attention.  I pestered Ben a few times, trying to get out of the 90-95% finished rut.

Voila, the magic of the internet.  Toe kicks instantly appear.

To skip the awkward leaning on the floor, applying oil while avoiding getting it on the floor, shoulder cramps that’ll surely follow routine, I applied water based poly before install.   That way it’s a one and done deal.  The rest is sealed with teak oil.

So far, I’ve got three coats on everything.  Lightly sanding between coats makes the finish ultra smooth, leaving a subtle sheen.

We chose teak oil because it’s easy to reapply as necessary.  Either as a rejuvenating/refresher coat or if there’s a damaged area in need of sanding.  On this side of the kitchen, we have to finish the last 5% by closing off the sink cabinet. 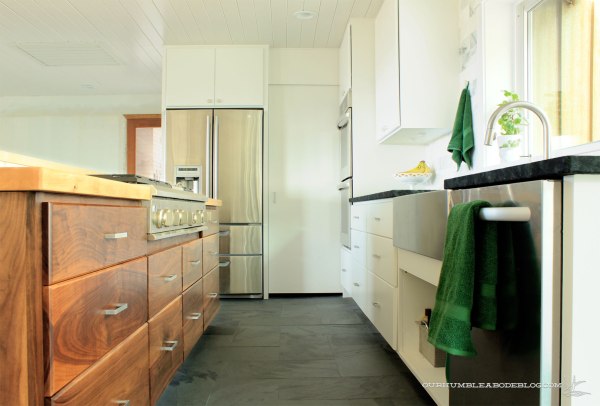 And grout the tile behind the cooktop.

Sometimes, as we work on things, plans change.  In our original plan, the walnut also covered the back of the bar area.  For a few reasons, we had to change gears and go in a different direction.  Nine foot, clear (no knot holes completely through) boards are seemingly impossible to get right now.  We also couldn’t secure the boards without visible nails or screws marring the faces.  Which kind of defeated the purpose of attaching a pretty wood to the back.  A line of nails would bug the crap out of me.  Plywood only comes in 8 foot lengths, leaving a seam somewhere along the back.  Again, it would drive me nuts.

Ben suggested tiling the back to match the backsplash, but I thought it’d look too busy.  Instead, we attached 1/2 inch MDF, with casement covering the seam and divided the back into four areas.  Once we get four stools, each will have a designated area.  Not our first plan, but the white looks fresh against the maple.

Now I have to finish the wall smoothing and we’ll be able to build the cabinet across from the breakfast nook.  I’m really pushing to become a 100% finisher.  Any lingering projects you’re finishing up?

16 thoughts on “Nuts for Walnut”