You’ve seen the house progress over the last two years, now check out the outdoor spaces.  Though we’re still far from finished, the outside received a lot of attention last summer.  We started out with an uneven, weed riddled paver patio, large ostentatious lion head fountain, large trees planted too close to the house, a short tall rock wall, and very neglected or non-existent plantings.

The rock wall was built to act as a retaining wall, separating the patio and hillside.

While great in theory, the 18 inch high wall wasn’t tall enough to hold back the hill as it had already overgrown it.  When landscaped, the patio was built up too high, covering the bottom of the wooden rim joist atop the concrete house foundation.  This is a huge problem because it could cause rotting (and lead to major structural issues).  It also made it easy for bugs, dirt, and water to get in the basement.  To prevent these issues, we pulled out the fountain, patio, and rock wall.  Then excavated another foot of dirt to sit below the foundation’s top edge.

We used large boulders as a taller ‘wall’ to keep the rocks on the hill.  For a fun feature, Ben tucked a waterfall with covered pond into the hillside.

For a clean outdoor entertaining area, we built a slightly raised deck from reclaimed beams. 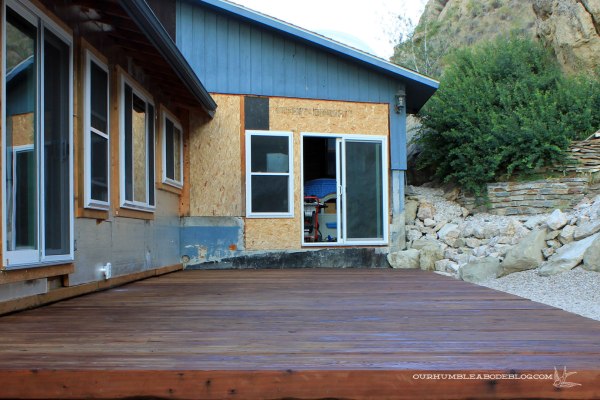 Just as we neared our rock and hardscaping finish line, a huge rainstorm channeled water and dirt from the natural hill above, back down.

Fortunately, the rocks stayed in place, though it filled with dirt in some areas.  Sure, it sucked to clean out and redo, but we were so lucky we had done that landscaping.

Mud still would have slid down the hill and filled the back yard, but our basement would also have been flooded with water.  It could have been so much worse.  All over town, we heard stories of water filled basements, caved concrete block retaining walls, and mud filled pools.  Before that, I’d never fully realized the sheer power and strength of water.  It’s even worse when you add steep hills for it to pick up debris and momentum.

After cleaning the mess, we dug diversion trenches to direct water to safe places, if a large storm happens again.  The we added a fun DIY gas fire pit.  We did keep a few previously landscaped features.  A set of rock stairs with a stacked rock flower bed.

It seems most of my succulents survived the record-breaking cold, snowy winter. 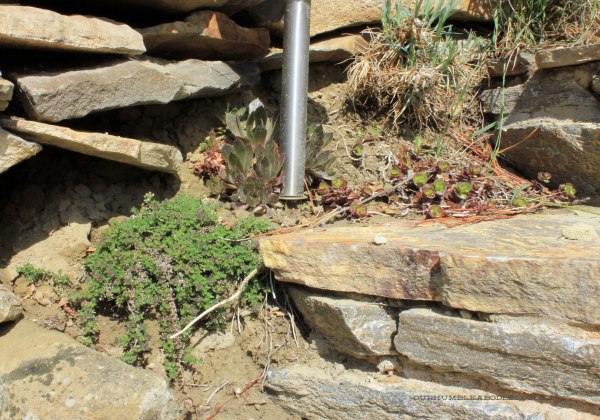 Along the waterfall, there are a few little ‘pockets’ of dirt between rocks.   I’ve started planting small succulents in these areas to green things up.

Here’s a before shot of the back from up the hillside:

It’s easy to see how deceptively steep it really is from that angle.  Today, we’ve got the hard parts done, but need to add plants.

Siding will be nice, too.  Ha!

Before, there wasn’t an easy way to get to the back from the driveway.  Ben built matching beam steps to link the spaces together.  Those posts will get cut down soon.

Just as the back had been neglected, the front didn’t look any better.  Overgrown, wild-looking hills scattered with half dead trees and shrubs isn’t what I consider pretty. 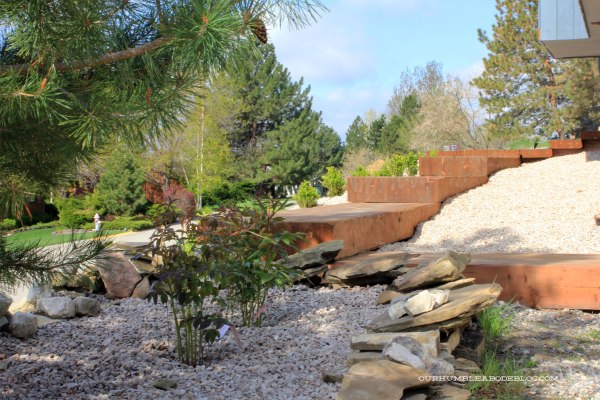 A train of boxwood evergreens.

Off the deck, there’s a plateau area that looked mostly dead.

Another before of the walkway:

You can see why siding is this summer’s priority.  Not that the blue was much better.  And today:

I’ve even got a few potted plants by the front door.

As I said earlier, we’ve got more before we’ll consider this finished.  We’ll be able to add more plants after siding.  Don’t want those in the way of the ladder and scaffolding.  Still, we’re happy to have new, better functioning hardscapes.

One thought on “Outside Updates, Two Year Check Up”