Over the last two years I’ve dreamed, researched, plotted, and planned, and at long last, I’m slowly tackling our landscape plan.  Having an incredibly steep lot, both front and back, has been challenging to say the least.  Before starting anything, we discussed oodles of options: wood, metal, concrete, or stacked stone retaining walls, all of which are difficult to secure enough to prevent leaning or toppling over time.  Yes, plenty of houses have these in our ‘hood, but they’re all leaning or have caved in heavy rains.  We kept coming back to one option, setting boulders against the natural slope to prevent erosion, but it also serves as a retaining wall, without being rigid and noticeable if it shifts a little.  But, that led to another decision to fill even the flat areas with rock, not knowing where or how to separate the slope from the flat areas.

Basically what I’m saying is, we have literal TONS, and tons, and tons of rock and while it’s super low maintenance, I’ve been looking for ways to break up large areas.  Of course, plants are a must and I’ve added 170 (no exaggeration) between this year and last, though I have deviated/changed up my landscape plan.  Sadly, I’m not finished, instead focusing my attention to the most noticeable areas, then I’ll take time to tackle the smaller, untouched areas later on.

Our bocce court is a water and hassle free way to section off a large rectangle.

Another large part of the rock is broken up by the reclaimed beam back deck, stairs, and front steps, but between the bocce court and stairs was a long strip of super boring rock.  After nestling in a few pavers in the back, I knew adding a longer, winding path would add interest.

Reusing leftover pavers from the old back patio, I created a stepping stone walkway to connect the two areas. 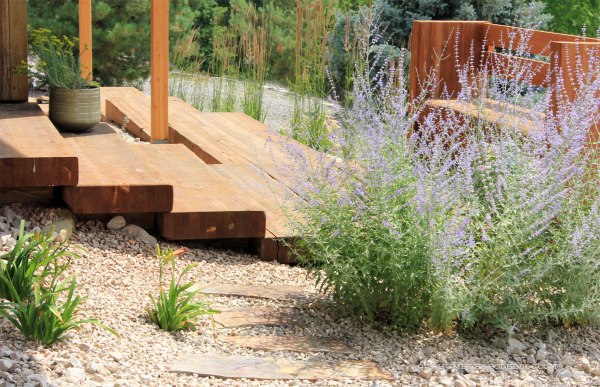 Just off the step edge, narrower stones go between the Russian sage and day lilies.

On the other side of the Russian sage, I plan to add a short ground cover plant below the basement windows, so I curved around, leaving room for growing plants. 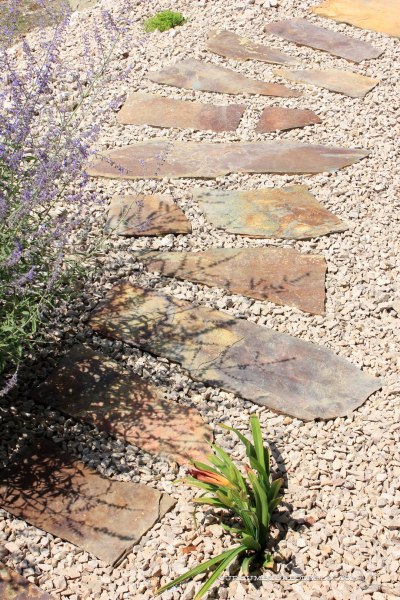 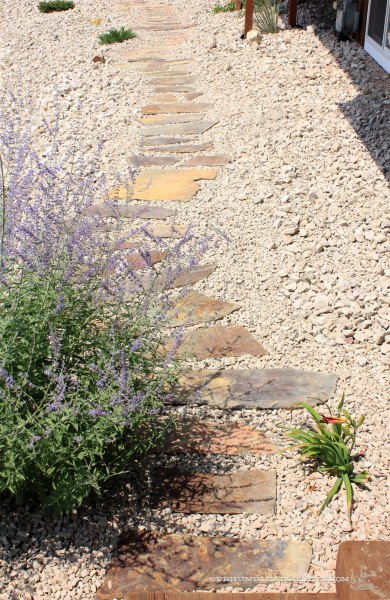 On the other side, I’ve already added my favorite succulent, a stonecrop Angelina. 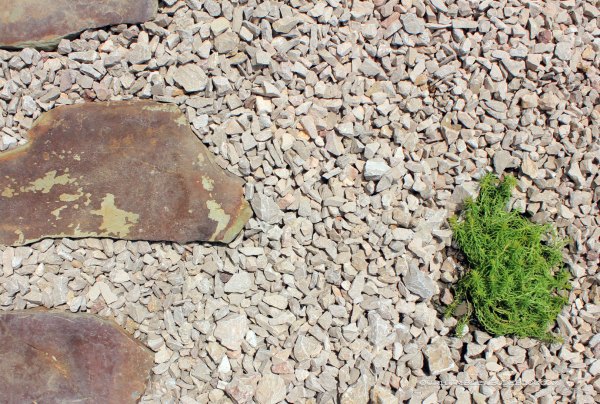 I know it grows well here with little water or effort because the one in the back near the waterfall has gone crazy over the last year. 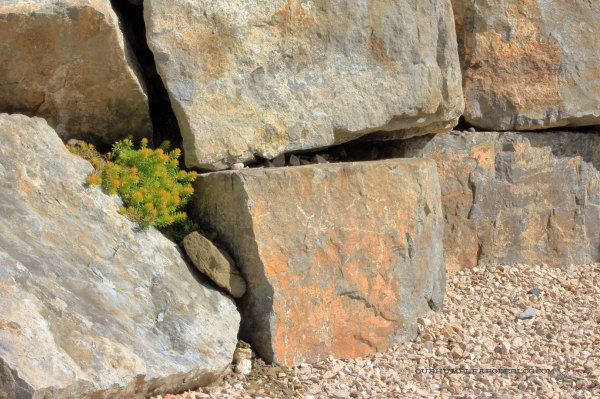 Creeping junipers are always welcome, covering large areas with year round color, but need little maintenance.  To contrast against the deep emerald-green, I added two golden barberry plants.  Ben says the just look like dying plants, but I love the chartreuse color.

Looking from the bocce court toward the entry, things are taking shape, but still not finished.

I find adding plants extremely enjoyable, bordering on addicting, but waiting for each to mature is a different story.  Much like children, even fast growing plants are hard to notice growth when seen on a daily basis.  You don’t see a startling difference, but looking back on pictures proves just how much they’ve changed in a short time span. 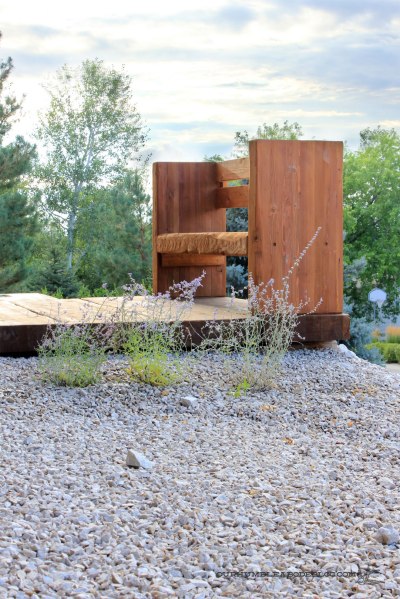 Look at the puny Russian sage not even a year ago, now they’re almost five feet tall!  Can you tell plants and landscaping have been at the front of my mind these warmer months?  Never before did I enjoy gardening, but I’m totally digging it now.  Oh the puns, the hilarity.  Now I feel like going through old photos of my kids and plants to fully appreciate the changes and growth that have taken place right in front of my face.  I didn’t realize how nostalgic a simple walkway could make me feel.

4 thoughts on “Walk This Way”