Bit by bit, progress is happening in the pool house and we’re this close to being able to close up all of the walls.  If you’re feeling like we’ve been working on this forever, you’re not alone.  Officially, we started late last year on the ceiling, which was a task and a half.  Though the rest of this room is relatively accessible, the peaks via ladder, we still have dozens of steps to tackle.  And that’s just the walls and the stuff inside.

Creating beautiful rooms is only half the battle.  Creating functional and efficient spaces is the other half.  The far less glamorous, ugly, tedious, and often underappreciated half.  Right now, we’re still in the ugly phase, but hope to create something beautiful soon.

In the five and a half years we’ve lived in this house, the pool never functioned.  Which is a big reason we were able to scoop this house up for the price we did.  Because the pool doesn’t work, we shut off  all the water, hoarded building materials, and never have heated this space.  It’s large, about 1,600 square feet with 14 foot vaulted ceilings.  The majority of the north and west walls (straight ahead and right in the photo below) are concrete foundation due to the steep slope of our lot.

When our house was built in the 70’s, it was typical to build a wood framed wall atop the foundation and fir out the foundation with 2 by 2 inch wood strips.  Essentially, there’s a thin sheet of insulation and that’s it.  Actually, you can see a little bit at the bottom of the left wall in the photo below:

I guess what I’m trying to say is, this room as it was before, was about as efficient as a cardboard box.  And what’s the point of having an indoor pool if it’s impossible to heat the space to a comfortable swimming temperature in the cold months?!

To achieve that, we’ve framed in new 2 by 4 inch walls, tucking insulation between the old and new.  Above the foundation, there’s space for another sheet because we’ve eliminated the half wall step. 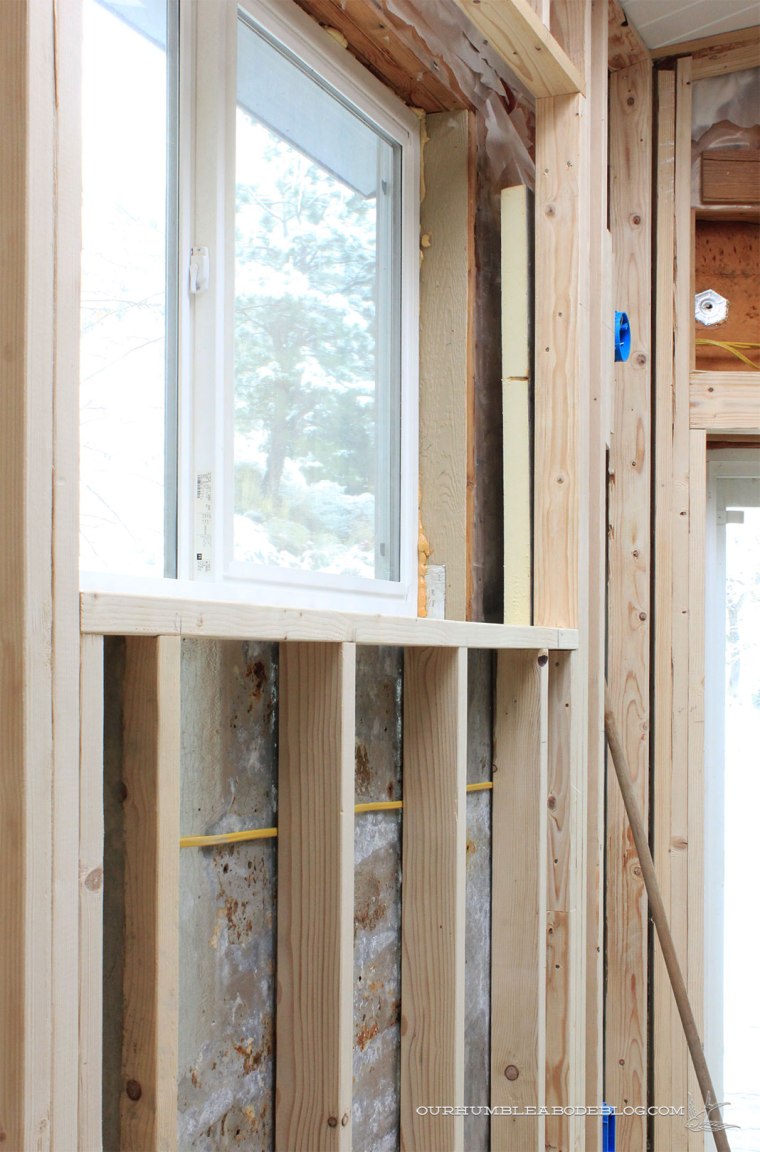 Our new electrical  runs behind the new studs, then Ben adds another sheet of insulation inside each stud bay. 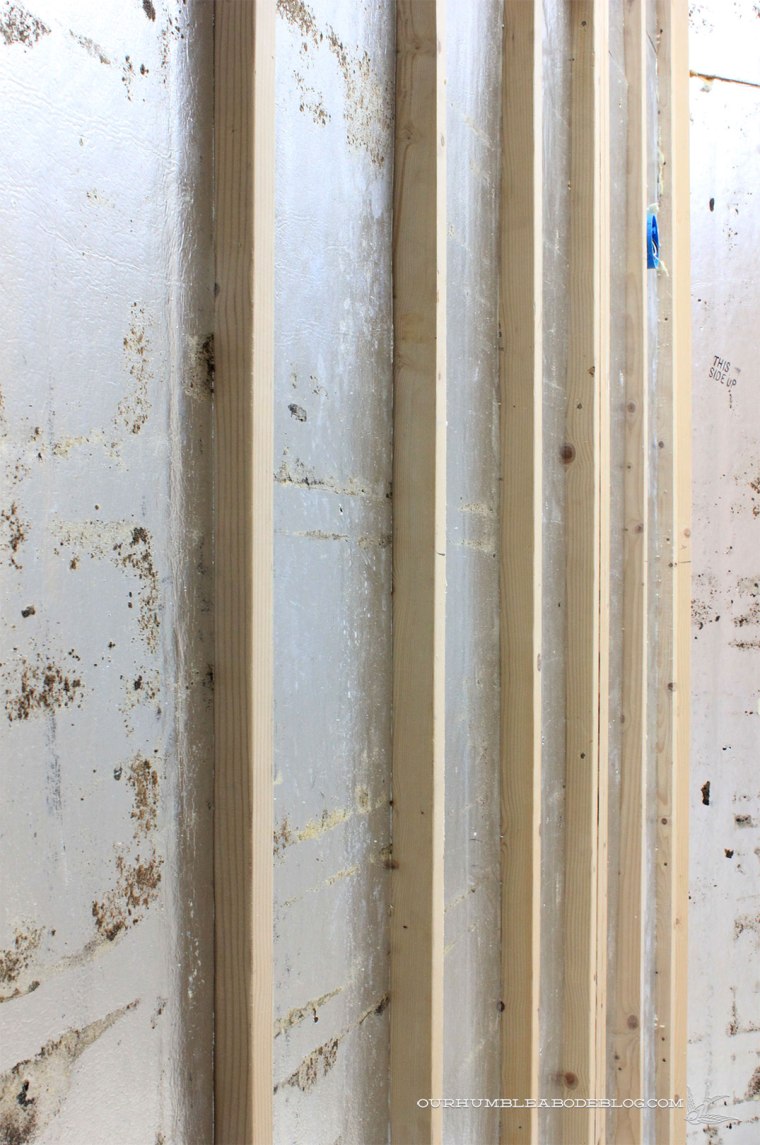 Each 2 inch thick Polyisocyanurate foam sheet has an R value of 13.  (R value is the resistance of heat flow through a given thickness of a material.)  By doubling, or in some areas, tripling the insulation, we have a total R value between 26 and 39.  Fiberglass batts have an R value ranging from 2.9 to 3.8 per square inch.

Back in 2014, before we installed our new siding, we took similar steps to insulate the exterior of our home.  Then, when we remodeled our basement two years ago, we followed the same steps I described above.  Immediately, we noticed the house maintained temperature much easier, keeping cool in the summer and warm in the winter.

In the pool space, we (let’s be honest, it’s all Ben), have one more section of wall to insulate. We had already completed the front wall, so we took a break from the tedium of insulation to start hanging the 4 by 8 foot sheets of exterior grade plywood.

To complete the board and batten wall treatment, we need a durable backing that can perform in this wet environment.  Hanging the sheets requires marking the 8 inch spacing of the future batten strips, nailing in place where the strips will hide the nails.

Each sheet hangs 1.5 inches above the floor, to prevent the sheets from wicking up any water near the wall.  Baseboards will cover the gap and thin boards will follow the edge of the ceiling.

Another horizontal band will line the room at the 8 foot mark, covering the joint of the sheets.  Something along the lines of this, but you know, real:

As usual, there are many steps we need to take before we can get to that point, so we’ll keep working and I’ll keep you posted.

4 thoughts on “Importance of Insulation”